In need of a little inspiration for what to watch this long weekend? Look no further. We put together the perfect selection of long-weekend movies! 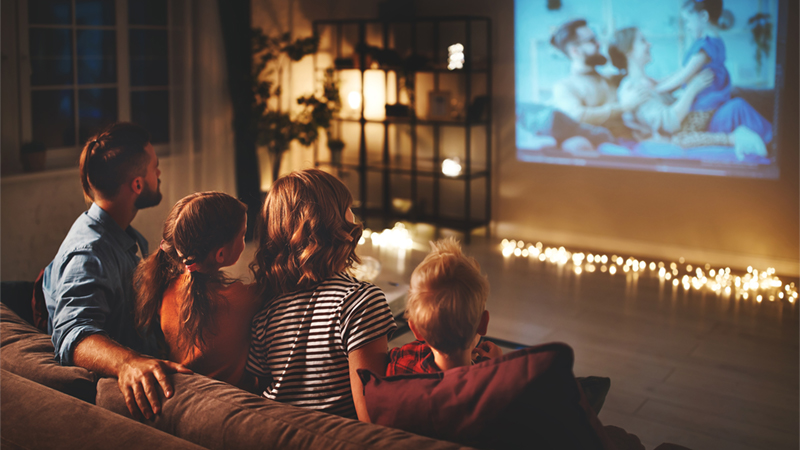 Pick a genre and get watching!

As the weather gets colder, what better way to warm you up than with a heartwarming love story? From the Hallmark classics to some of your favourite romantic comedies, we have you covered.

Start with Kiss at Pine Lake, a classic Hallmark movie where a man is reunited with his former teenage crush. Old feelings resurface as they work together to save a favourite childhood retreat from closure.

Follow it up with the romantic musical that received multiple award nominations: A Star is Born. Bradley Cooper directs and stars in this emotional film about a hard-drinking country music star who discovers and falls in love with a young singer. As one of their careers takes off, and the other diminishes – the storyline makes it impossible not to watch (and sing along to). Then jump into the rest of your weekend of love with actors including Emilia Clarke, Amy Adams, and Ryan Reynolds.

Grab your movie buddy! You're going to need someone to hide behind for these movies.

Start the weekend off with the Will Smith classic that will make you imagine a world much different and darker than ours. In I am Legend, Will pursues a cure to help fight the human-made plague so he can make a safe return to his wife and daughter and go back to their once peaceful world. When this movie was initially released, Will Smith received many favourable reviews on his solo performance and acting skills.

Next, discover what happens when five friends find a book of the dead in the movie Evil Dead. After the friends unearth this book in a remote cabin, they fight for survival against an evil entity that possesses each person it can grab a hold of. The theatrical release poster from 2013 states it is "the most terrifying film you will ever experience," and will leave you asking - Which friends make it and which don't?

Wrap up the thrill-a-thon with the beast of all beasts: Godzilla. The King of all monsters challenges humanity's existence when it collides with Mothra, Rodan and the three-headed monster, King Ghidorah. The visual effects and cinematography of this film genuinely bring the monsters right to you!

What's better than starting with an animated movie marathon than with three cheeky chipmunks? Join Alvin, Simon, and Theodore as they embark on a cross country journey to stop Dave from proposing to his girlfriend.

Next is an animated twist on the classic story of Romeo and Juliet, except this time, the names are Gnomeo & Juliet. A comedic story about two love-struck garden gnomes that fall in love while stuck in the middle of their neighbourhood feud. Do Blue Gnomeo and Red Juliet have a future together? The movie Gnomeo and Juliet, which received praise for its directing and storyboarding, also features the song "Hello Hello" by Elton John and Lady Gaga, which was nominated for multiple song awards!

Lastly, follow the story of Coraline as she encounters an alternative reality that is close to hers, but still very different. Is it better? Watch to find out.

If you're a superhero fan, then this section is most definitely one for you. Start with The Suicide Squad and watch Harley Quinn and the rest of the squad battle a mysterious and powerful entity. Keep your weekend going with Justice League, where Batman and Wonder Woman recruits the rest of the superhero team to try and save the world from a catastrophic event! This movie is the third installment in the DC Extended Universe and follows Batman v Superman: Dawn of Justice. Wrap up the action-packed movie marathon with the ultimate battle of the superheroes guaranteed to get your heart racing with its appealing visuals and wonderful performances.

*All the above channel numbers are based on Westman Television subcription