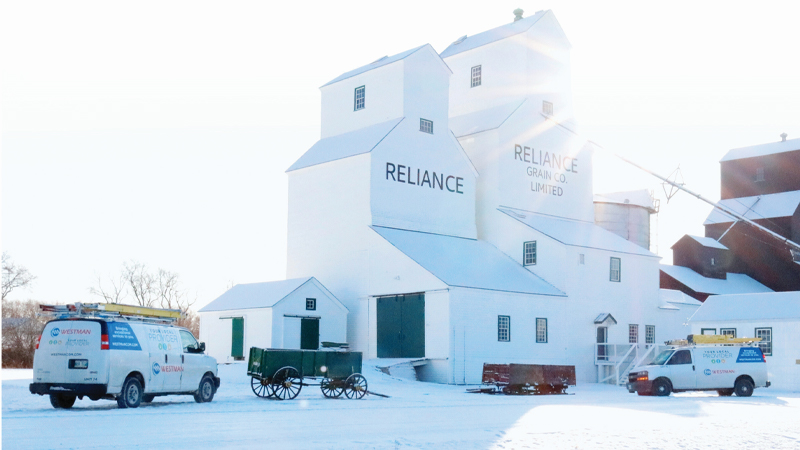 Westman has been shortlisted for two Tuned-In Canada awards, Best Photo: Connecting Canadians and Best People: On-Camera Community Channel Personality. Each category's winners are determined by nationwide voting, which is open on March 18 and closes on April 1, 2021.  Voting takes place at www.tunedincanada.com/vote/  using SMS authentication. You can cast one vote per day for 15 days or deploy all 15 at once.

Westman is up against three other nominees in Best People: On-Camera Community Channel Personality and Best Photo: Connecting Canadians. If Westman is the winner, the $1,000 prize for each category will be donated to Samaritan House Ministries Inc., which is the local charity of their choice.

"It is always an honour to be recognized on a national scale; we are excited to be shortlisted for two Tuned-In Canada awards," said Courtney Baxter, Marketing Manager at Westman. "We have a lot of pride in supporting our communities we serve and would love to win these awards for the opportunity to donate $2,000 to Samaritan House Ministries Inc."

Bernie Whetter is a long-time volunteer host of Here We Grow, and this year is being acknowledged by being shortlisted as one of three nominees for Best People: On-Camera Community Channel Personality. With a bachelor's degree in Agriculture Science and a master's in Business Administration, Whetter has been hosting Here We Grow for the past eight years. The idea for the show was first brought to life in 2013 and was being produced shortly after. Whetter has extensive knowledge of the various topics he discusses and mixes that with his friendly personality to make the show one of a kind. As a local business owner, Whetter enjoys giving back to his community, and this show is one of his ways of doing so.

The photo Westman was shortlisted for was of the Inglis, Manitoba elevators. This was the start of Westman's journey to bring communication services to underserved communities across Manitoba. Inglis is one of six communities Westman connected to their fibre optic network over the past year. In addition to Inglis, Westman connected Rapid City, Minto, Oak River, Haywood, and St. Claude throughout 2020. This allowed Westman to offer High Speed Internet services to residents and businesses who previously did not have access to essential speeds.

"The CCSA has been running the awards since 2014 and has provided more than $50,000 to winning companies, which in turn have donated their winnings back to the communities where they live and work," said Jay Thomson, CEO of CCSA. "We hope that everyone in Westman's serving areas will embrace the community spirit at the heart of this friendly competition and bring out the vote to support their local nominee, Westman Communications Group."

ABOUT TUNED-IN CANADA: THE CCSA AWARDS
Tuned-In Canada is a long-standing annual CCSA initiative that celebrates CCSA-Member independent communications companies' contributions to their communities and for their customers. For more information, visit Tuned-In Canada 2021.

ABOUT WESTMAN COMMUNICATIONS GROUP
Westman Communications Group is the operating name for Westman Media Cooperative Ltd., which provides service throughout Manitoba. Westman is a customer-owned cooperative, which operates cable systems in 44 communities. Westman is a leader in communication services, including Internet, Digital HD TV, and Phone. Westman also owns and operates local radio stations Q Country 91.5 FM and 94.7 STAR FM, which broadcast throughout Western Manitoba. Westman is proud of its strong commitment to its members and the communities it serves.